Gbadolite: The Versailles of The Jungle

The aqueduct of Segovia is a classic example of Roman water transport architecture—simple in design, yet magnificent to behold, and surprisingly durable. The aqueduct was built in the 1st century AD to convey water from Frío River, 17 km away, to the city, and it has been carrying out this function in one form or another for the past 2,000 years. This is all the more impressive when you realize that this aqueduct was built without a single ounce of mortar.

Segovia, situated approximately 100 km northwest of Madrid, was originally a Celtic settlement, before the city fell to the Romans in around 80 BC. Under the Romans, Segovia rose to become an important town of Roman Hispania.

The bold construction made from stacked granite blocks without mortar and without bracing was built in the later part of the 1st century, or the early 2nd century; it’s hard to tell since the inscription on the stones of the aqueduct, which would have firmly established the date of construction, had eroded away. Archeological evidence suggests that the later date is more likely, which puts the time of construction around the time of Emperor Trajan or Emperor Hadrian.

Water was brought from the mountains taking advantage of the natural elevation through a subterranean channel to a large storage tank called El Caserón (or Big House), from which it was led to a second tower known as the Casa de Aguas (or Waterhouse). There it was naturally decanted and sand settled out before the water continued its route, travelling 728 meters over the elevated aqueduct bridge until it reached Plaza de Díaz Sanz. Crossing the wide Plaza, the aqueduct bridge looks dramatic with its tall double arches supported by pillars performing a spectacular balancing act. The decision to build the bridge without mortar was probably imposed by the lack of limestone to make cement in this part of the region. Ironically, the lack of cement might have contributed to the structure’s longevity as it allowed the bridge to flex allowing it to survive small earthquakes. 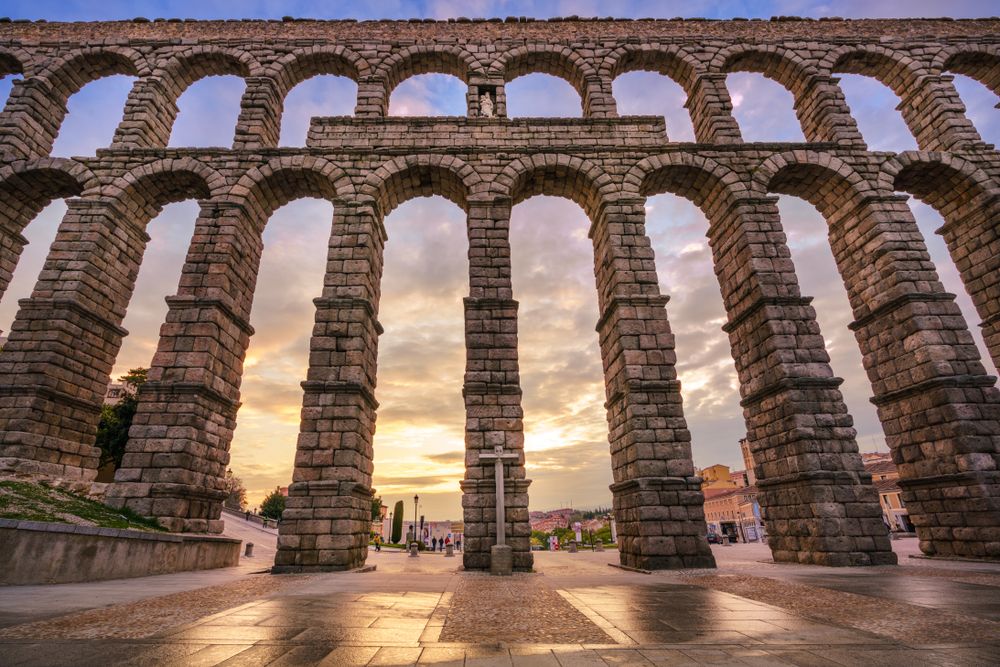 The bridge is built from approximately 20,400 blocks of granite. The largest block in the bridge has a weight of 2 tons, and blocks of one ton are common. These were hoisted to almost 30 meters with the help of wooden cranes, as evidenced from holes in the granite. The rounded edges of the granite blocks of the aqueduct is partly original, but also enhanced by weathering of the relatively soft granite in the course of time.

During the Roman era, three of the tallest arches displayed a sign each in bronze letters, indicating the name of its builder along with the date of construction. Today, two niches are still visible, one on each side of the aqueduct. One of them is known to have held the image of Hercules, who, according to legend, was founder of the city. The niche now contains an image of the Virgin. The other image was lost. 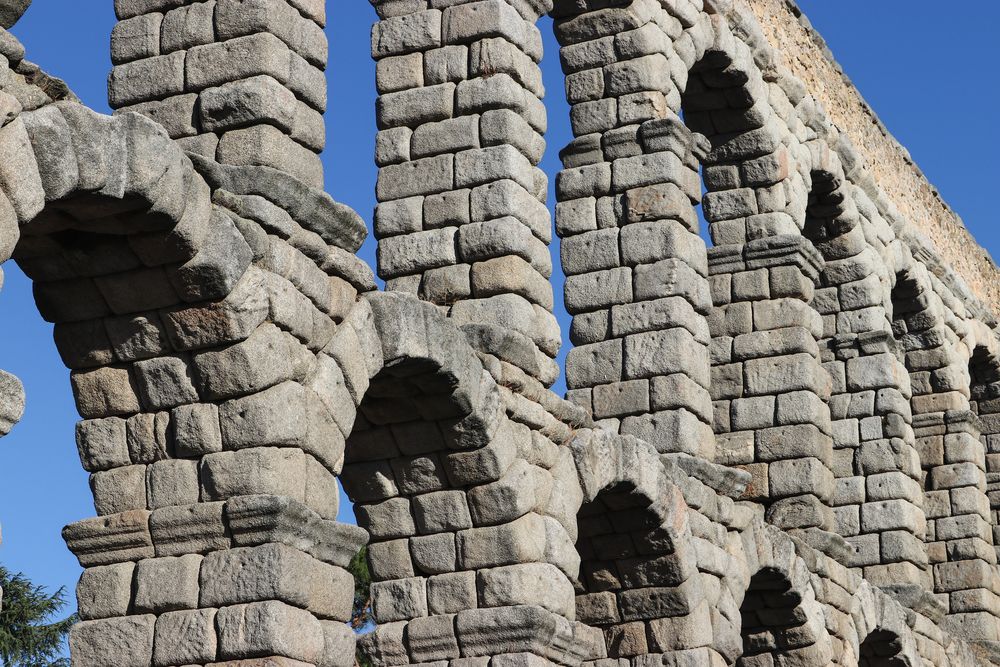 To say the aqueduct survived for two thousand years would not be entirely correct. In the 11th century, invasion by Yahya ibn Ismail Al-Mamun destroyed approximately 36 arches of the aqueduct. Some of the dislodged stones were then used to rebuild the castle of King Alfonso VI. In the 15th century, the damaged sections were rebuilt taking great care not to change any of the original work or style. In the early 19th century, all buildings adjacent to the aqueduct were demolished to make repairs easier and increase structural integrity.

Although the aqueduct of Segovia is considered one of the best preserved elevated Roman aqueducts, the structure has not fared well in recent times. Erosion and decay caused water leakage from the upper viaduct, and pollution from cars caused the granite blocks to deteriorate and crack. Since 2006, the aqueduct is under the World Monuments Watch by the World Monuments Fund (WMF). 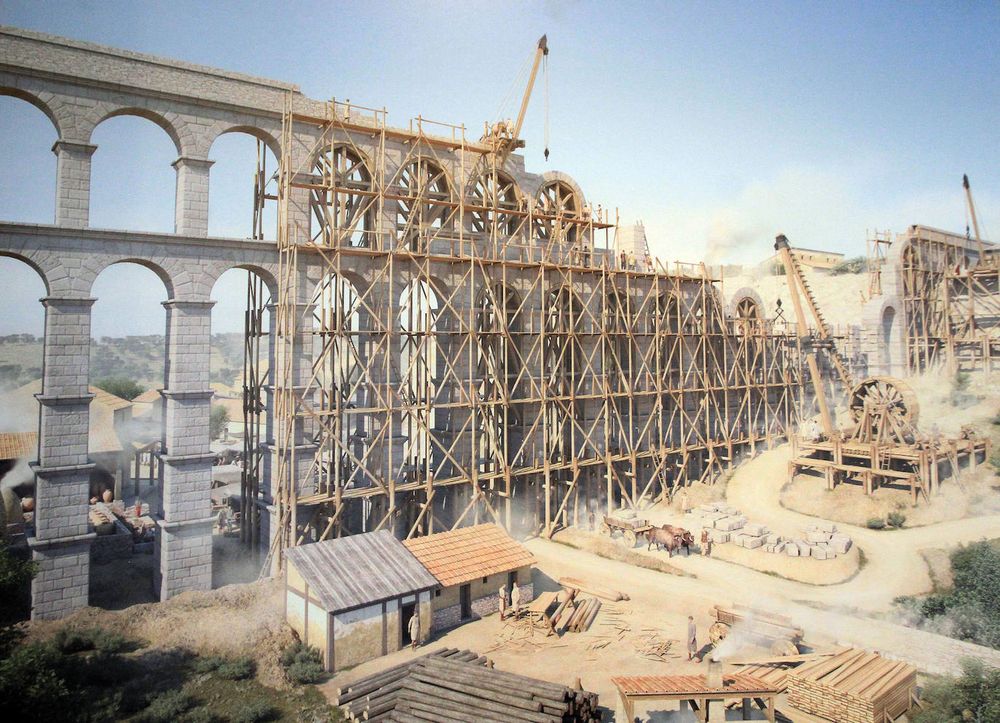 An artist’s rendering of how the aqueduct might have been constructed. Image is from an exhibition at the Museum of Segovia. Photo: Antonio Tanarro 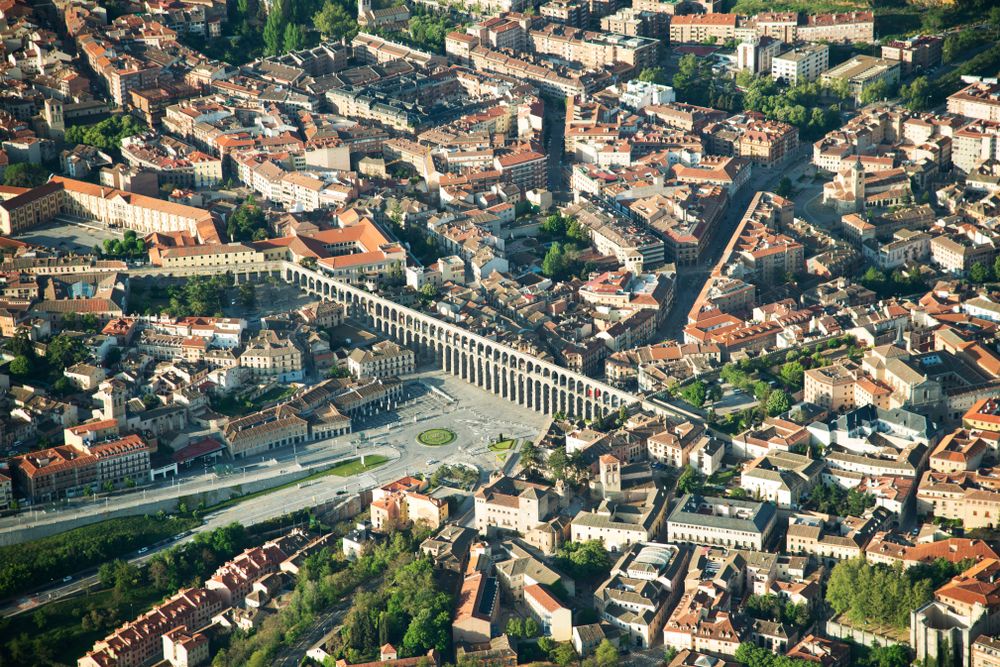 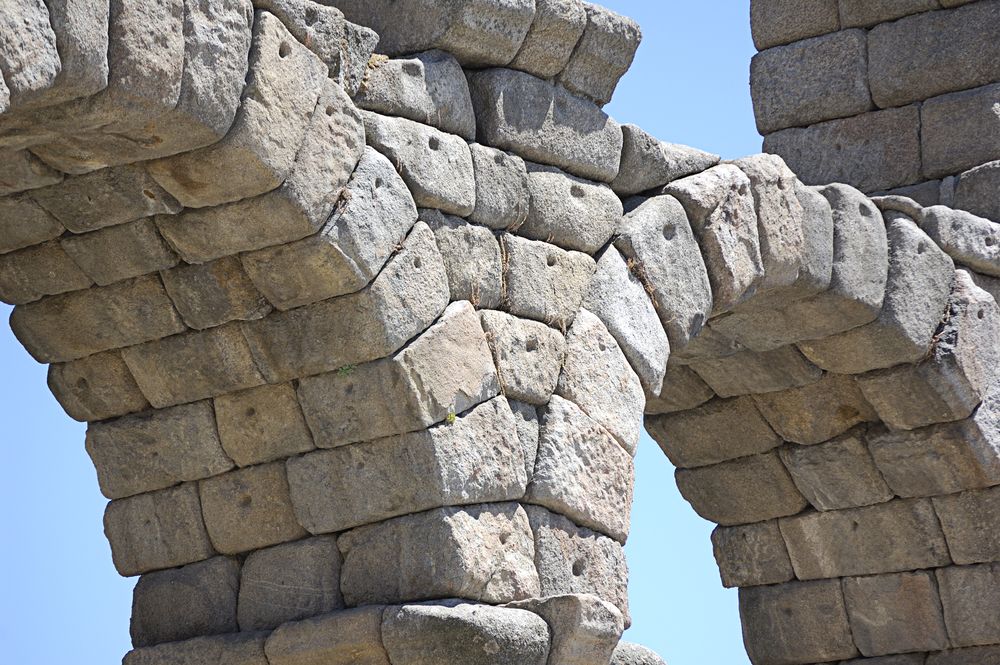 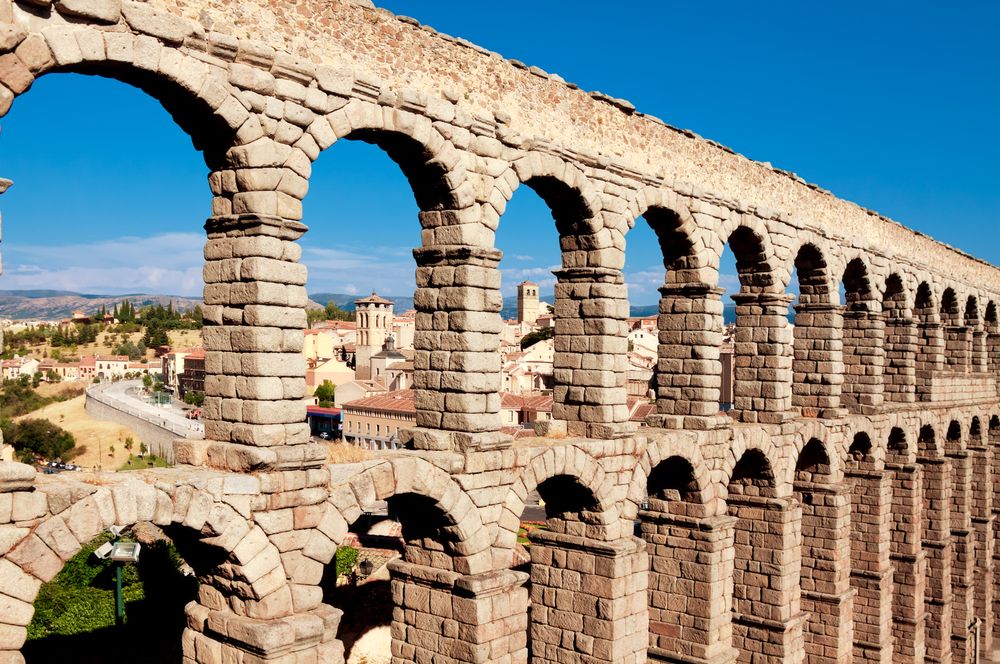 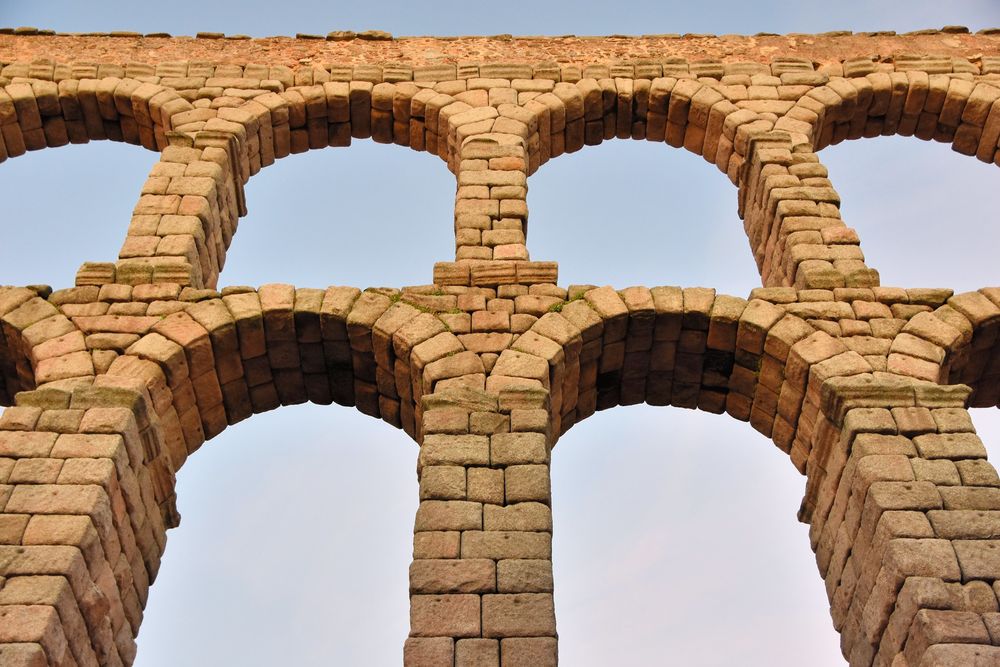 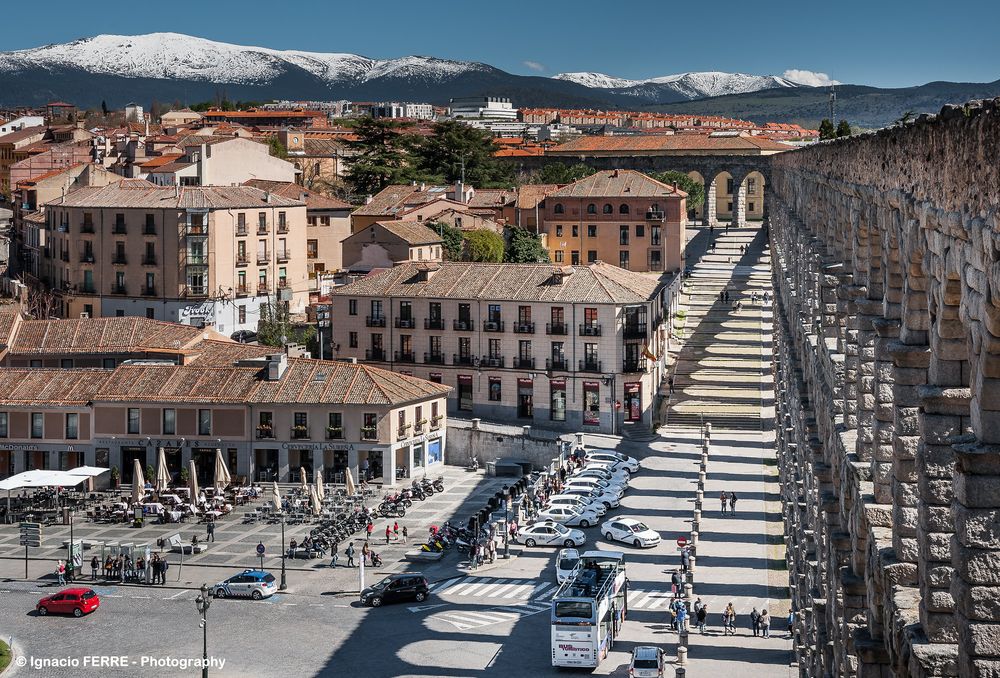