The 1925 Serum Run To Nome: The Incredible Story of How a Remote Alaskan Town Was Saved From an Epidemic

The first airplanes to join the First World War were not made for combat. They merely played the role of an observer, scouting enemy positions and movements. Intelligence gathering was essential for warfare, and this new technological innovation made it possible for an observer to look into enemy territory surreptitiously. Predictably, the enemy began doing the same, and soon it became necessary to prevent enemy airplanes from conducting reconnaissance and surveillance.

The first dogfights were made with pistols. The pilot held the airplane’s control stick with one hand and fired off his pistol to the sides with the other. Then a second crew member, the gunner, was added. Sitting on the backseat, his job was to operate a movable machine gun leaving the flying to the pilot. It was German aviator August Euler, who first saw the advantage of a forward-firing gun that could bring down an enemy from behind. Euler patented his design in 1910—four years before war started.

But many senior officers remained skeptical.

“The idea of coupling the firing mechanism to the propeller’s rotation is an affectation. The objection is the same as to any gun position which is fixed along the longitudinal axis of the aircraft: the pilot is forced to fly directly at the enemy in order to fire. Under certain circumstances this is highly undesirable”, wrote German Major Siegert. 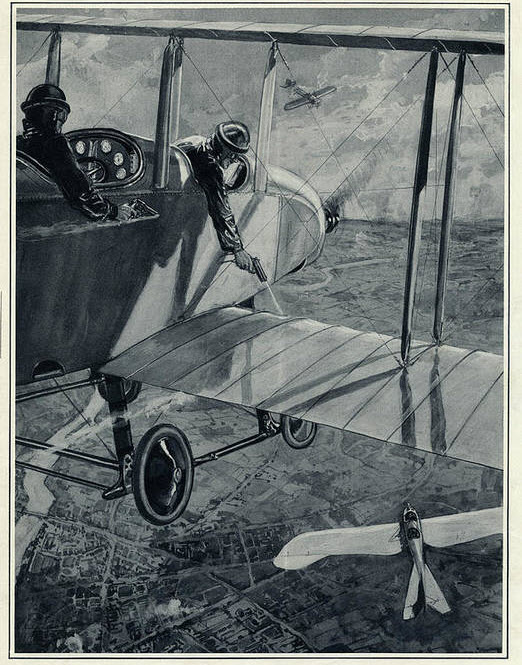 Duel in the air. An artwork that appeared on The Illustrated London News 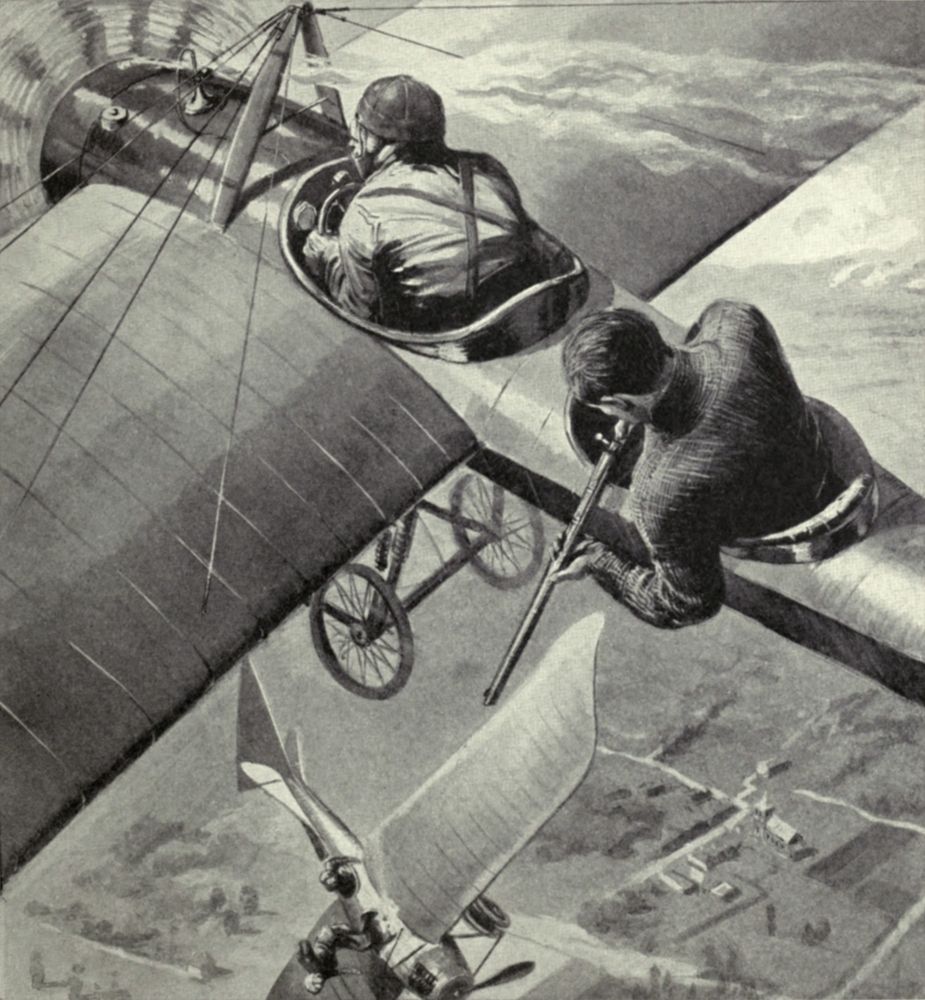 Nevertheless, airplane designers continued to file patents. In 1914, Swiss engineer Franz Schneider published a patent that could fire through the rotating blades of the propeller. A mechanical feedback system derived from the rotating cam wheel prevented the pilot from squeezing the trigger when the propeller blades were directly in front of the muzzle. The patent attracted little interest and nobody actually tried to build it.

That same year, French engineer Raymond Saulnier also filed patent for a different design. Unlike the Schneider patent design, Saulnier’s device was actually built, and may be considered the first practical synchronization gear to be tested. Unfortunately, Saulnier’s design scarcely worked. The machine gun that was used for the firing assembly was found to be unsuitable for the purpose, and the experiments ceased.

The French decided that the only workable solution for now was to fire straight through the propeller and pray for the best. To protect the propeller blades and safely deflect the bullets away, they were fitted with armored plates, and later with armored wedges. The system was crude but it worked. About 75 percent of all rounds fired passed through the propeller without hitting the blades. It was estimated that each blade could take several hits before there was any danger of its failing. However, the wedges diminished the propeller’s efficiency, and the considerable force of the impact of bullets on the deflector blades put undesirable stress on the engine’s crankshaft. 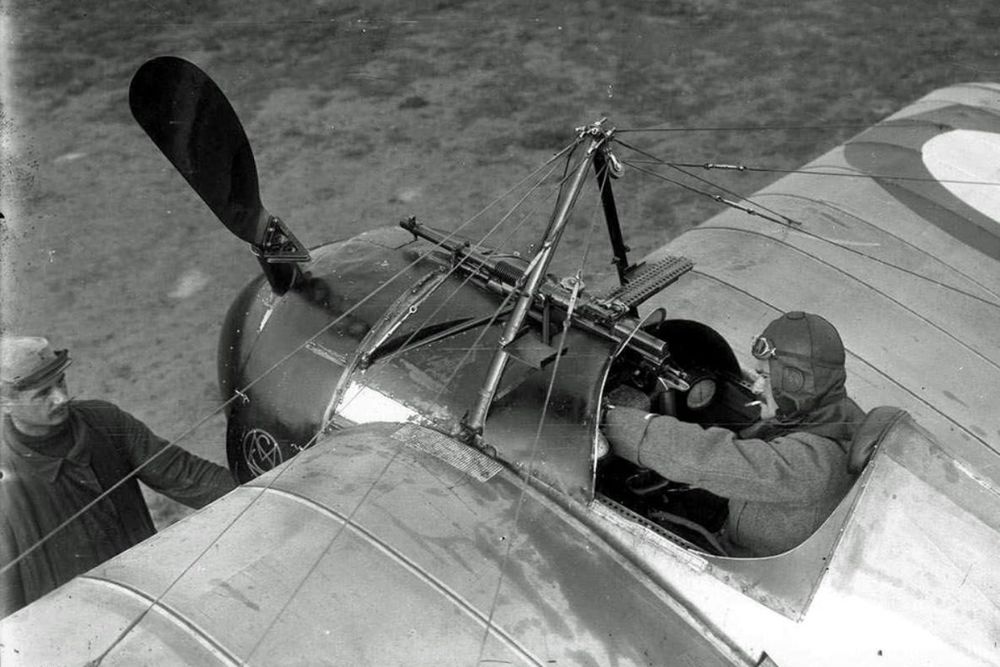 French pilot Jules Védrines in the cockpit of a Morane-Saulnier airplane in September 1915. The wedge-shaped bullet deflectors is visible on his propeller.

Nevertheless, on 1 April 1915, French pilot Roland Garros made the first successful kill, shooting down a German airplane near Diksmuide, in Belgium. On 15 April, Garros shot down another airplane in Ypres, and an 16th his third kill near Langemark. That same day, Garros’s plane was hit by ground fire and he was forced to land behind German lines. Garros was captured and his airplane was sent for evaluation.

The Germans were impressed by the armored propeller blades and wanted these fitted on their airplanes too. With that in mind, they sent for Dutch aircraft manufacturer Anthony Fokker, whose monoplane the Eindecker, was already doing frontline activity as a scout. But Fokker found the engineering sloppy. 48 hours later, Fokker returned with a better solution—a machine gun whose firing rate was synchronized with the turn of the propeller. It is suspected that Fokker and his engineer Heinrich Lübbe were already working on the synchronization gear before the captured airplane of Roland Garros was brought to him. 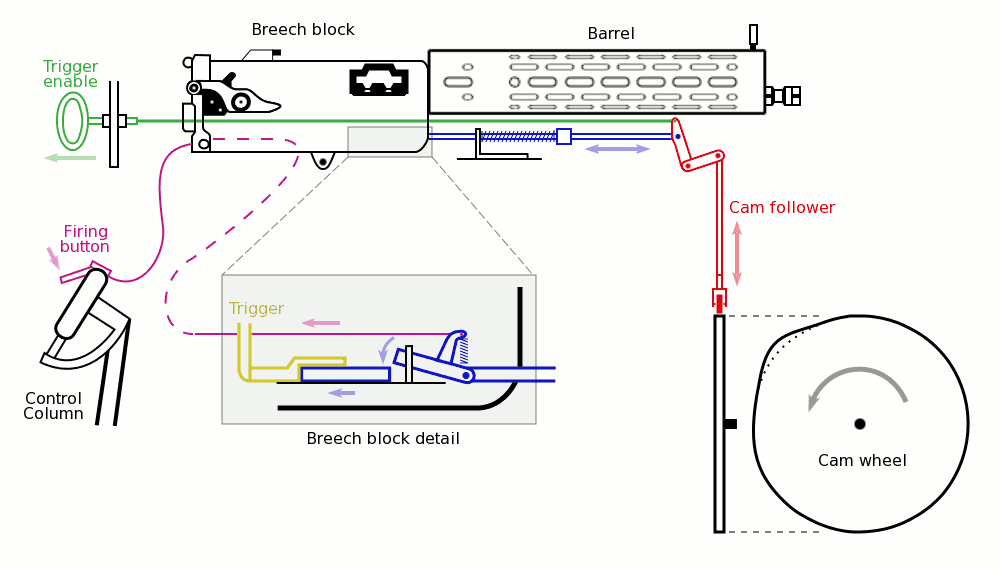 Unlike many of the earlier designs, which attempted to interrupt the gun when the propeller blades were on the line of fire, Fokker’s system was designed to actively fire the gun. Most important of all, Fokker’s synchronization gear was built and actually fitted to many German Eindeckers. Although in terms of performance, the Eindeckers were unremarkable, they were nevertheless the first true fighter aircraft. German pilots could use the airplane itself as a weapon, aiming the entire aircraft at the target. An aggressive pilot could make long, steep dives, aiming his aircraft at the target, firing a long burst and continuing the dive until well out of range. If the target was not destroyed, the German pilot could climb up again and repeat the process. This maneuver, now common in dogfights, was invented by the German fighter ace Leutnant Max Immelmann.

The exclusive possession of a working gun synchronizer enabled the Germans to gain air superiority over the Allies, shooting down their airplanes in devastating numbers. This period, starting from mid-1915 to mid-1916, came to be known as the “Fokker Scourge” or “Fokker Scare”. 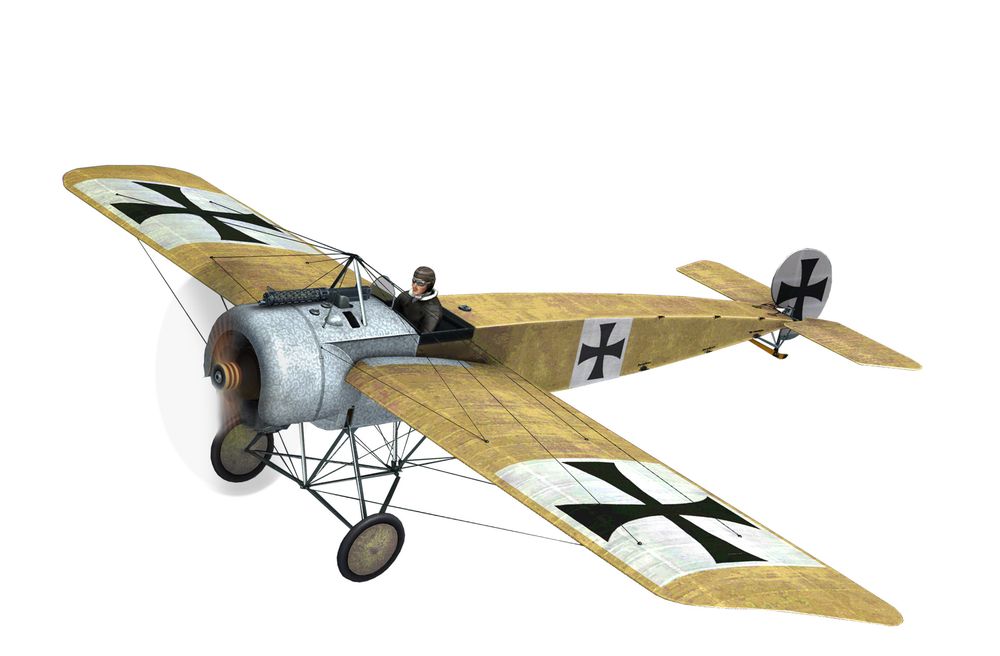 A 3D model of a Fokker Eindecker. Image credit: PNGwing

Germany’s dominance in the sky came to an end by the fall of 1916, with the arrival of technically superior Allied biplanes like the French Nieuport 11 and the British DH-2. The Nieuport was light and nimble, outclassing the Fokker Eindecker in every respect, including speed, climb rate and maneuverability. The Nieuport also carried a forward-firing gun, but it was mounted to fire over the propeller—shooting between the blades still proved to be a hard nut to crack.

The British finally got their hands upon the legendary Eindecker when in April 1916 a German pilot mistakenly landed his airplane on a British airfield. The captured aircraft was found not to have the superior performance it had been credited with. The British copied the synchronization gear and the first Allied aircraft with the ability to shoot between the blades was born.

The dominance of the air continued to swing back and forth between the Germans and the Allies until the end of the war in 1918. Towards the end of the conflict, the German briefly led a second Fokker Scourge, with their formidable Fokker D.VII, but even it could not prevent Germany’s inevitable defeat. Nevertheless, the airplane was so feared by the Allies that it was the only weapon mentioned in the Treaty of Versailles, specifically requiring the Germans to surrender all D.VIIs to the Allies.

The usefulness of synchronization gears disappeared altogether when jet engines eliminated the propeller in fighter planes.