High in the Andes among frozen glaciers, where virtually nothing survives, a small and plump, blue-gray feathered bird lays eggs and raises their young. It is the only bird, other than emperor penguins, known to nest on ice—the most ill-suited of environments for raising young ones.

The species known as the white-winged diuca-finch (Diuca speculifera) inhabits the high mountain meadows in Argentina, Bolivia, Chile and Peru. The diuca finch belongs to the large Emberizidae family, members of which are known to breed on the Arctic tundra, although only the diuca finch is known to build nests directly on the brutally cold ice.

The unusual behavior was first discovered in 2003 by University of Massachusetts Amherst geoscientist Douglas Hardy, during a trip to the Peruvian Andes. Hardy was startled to find several intact bird’s nests perched atop a glacier nearly 19,000 feet above sea level. One of them contained abandoned eggs. With each return to the glacier, Hardy saw more nests and even managed to photograph the bird.

Back home, his 9-year-old son, Spencer, an avid birder, spent hours poring over the photos and identifying species with the help of books. When his father returned from the site with feathers found around the nests, the Hardys got a conclusive answer from a bird expert at the Smithsonian Institution: the nest belonged to diuca finches.

In 2008, Douglas Hardy published a paper about his findings on the Wilson Journal of Ornithology. The paper was co-authored by his son, a grade-school student. Hardy made many trips to the Andes, but all he found was abandoned nests. It wasn’t until 2014, when the first active bird nests were observed on a glacier. The nests are bulky structure in the form of a cup, made of grass, twigs and feathers, and can weigh up to half a pound. The bottom is about 10 inches thick, and that’s about as much insulation the eggs receive.

In 2016, a BBC’s documentary team captured the first-ever footage of diuca nesting on an ice cliff in the Quelccaya Ice Cap in the Peruvian Andes. 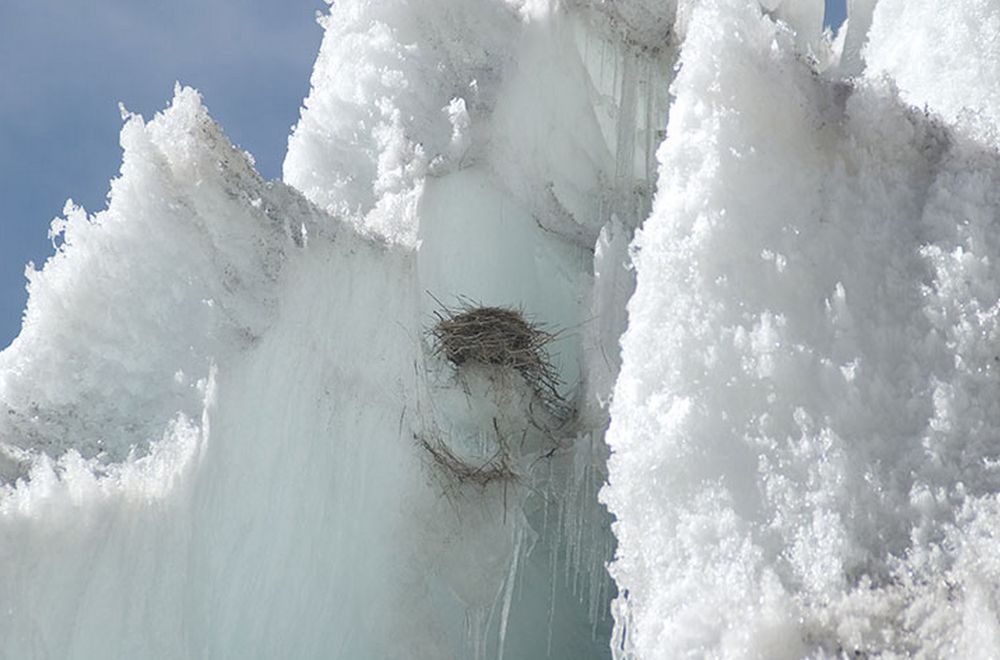 Although hatching eggs and raising young birds on ice is unusual, there are many bird and mammalian species that thrive in the cold. They are known as chionophiles (from the Greek word chion meaning "snow", and -phile meaning "lover"). The most common order of birds that survive in these habitats is the passerines, or songbirds. But other groups are also represented, such as the golden eagle of the falcon order, and the common raven, which is a corvid. Several species of ptarmigan are also well adapted to the cold.

Many mammals depend on the cold for survival, such as big furry animals like bison, musk ox, elk, reindeer, mountain goat, ibex, chamois and bighorn sheep. With all their fur and hair, these animals have a hard time regulating their body temperature during hot periods. These animals either lie directly on the ice, or use the cold air that drains off glaciers to cool themselves. Other animals use ice in various ways for survival. Carnivores like bears, snow leopards and wolverines travel across glaciers and snow patches to avoid leaving a scent.

But with shrinking glaciers, many of these organisms which rely on ice, snow and cold temperatures will find their habitats reduced, and some may even be threatened with extinction. 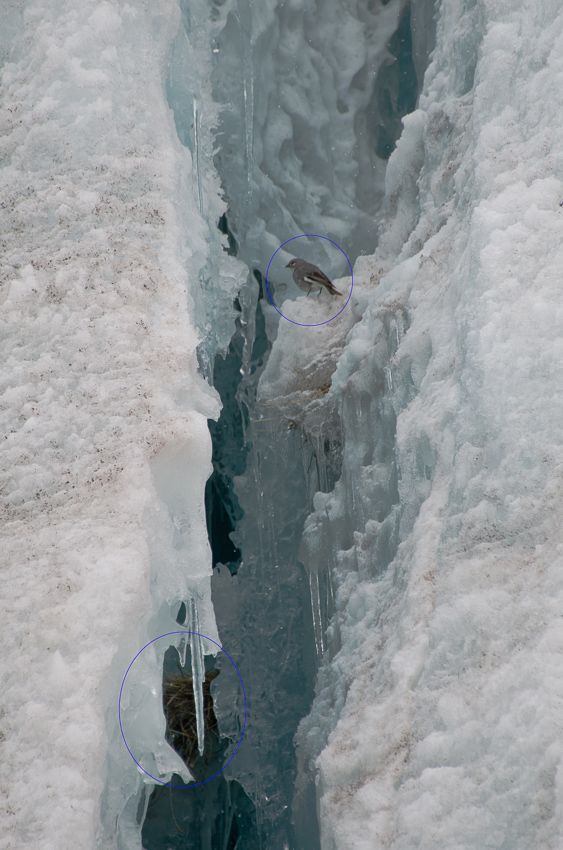