The Storybook Houses of Los Angeles

The Nevada Test Site in Nye County, Nevada, about 65 miles northwest of the city of Las Vegas, is scattered with relics from the United States’ nuclear age. Nearly a thousand nuclear tests were conducted at this place, of which about a hundred were atmospheric. Mushroom clouds from these tests were visible from almost one hundred miles away, and their tremors were felt as far away as Las Vegas.

The subsidence crater of the Huron King Test of 24 June 1980.

In the early 1960s, concern for fallout drove the tests underground, and for the next three decades more than nine hundred nuclear devices were exploded under the surface that left the ground resembling the lunar surface. Saucer-shaped craters formed when the ground subsided after an underground detonation riddle the test site, especially the Yucca Flat, where the bulk of the tests took place. Aside from craters, there are damaged military hardware, various infrastructure such as a bank vault, a train trestle, an underground parking garage, and the remains of a mock American community with houses, automobiles and mannequins, that was razed to the ground by a 29-kiloton nuclear test. These houses, along with the 390-meter-wide Sedan Crater and the unused IceCap tower, form some of the high points of the Nevada National Security Site tour.

Another relic of the nuclear tests, but not part of the tour, is a large vacuum chamber that was built for the ‘Huron King’ nuclear test in 1980. 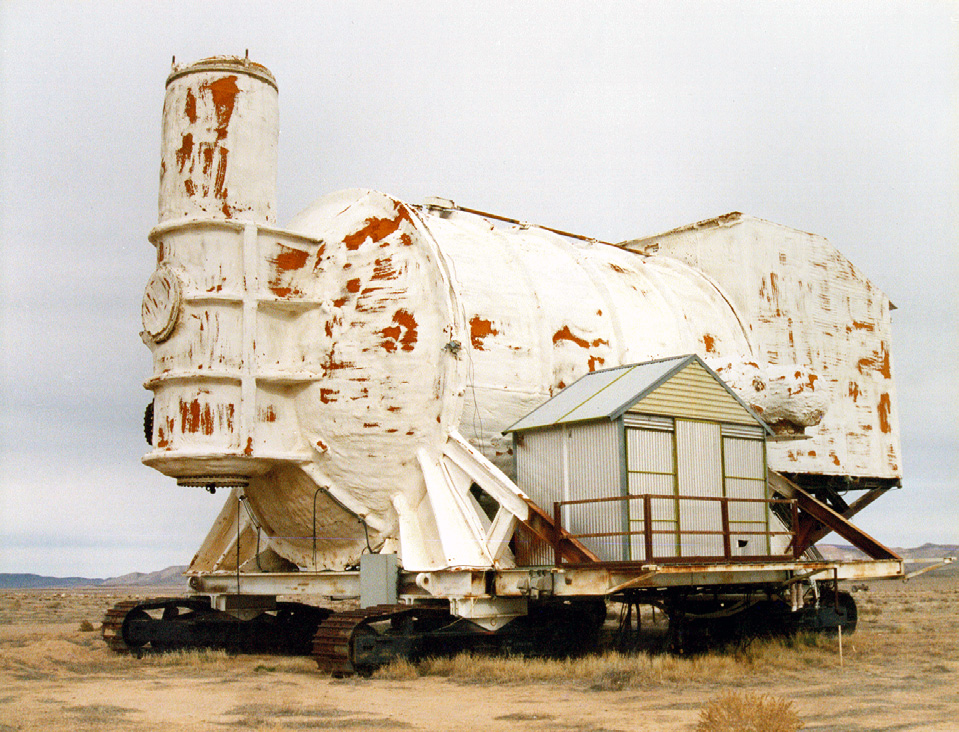 The Huron King test was intended to address concerns about how atmospheric nuclear detonation might affect military communication satellites in orbit. A nuclear explosion produces a large electromagnetic pulse, or EMP in short, that can be used by an enemy to inflict secondary damage upon electrical and electronic systems by generating high levels of current and voltage surges to burn out sensitive components such as semi-conductors. An electromagnetic bomb, can devastate and render functionless any modern society that rely on electricity by knocking out their power grid and disrupting communication equipment.

In 1962, the US conducted a high-altitude nuclear test code-named “Starfish Prime”, where they detonated a 1.44 megaton bomb 400 kilometers above the mid-Pacific Ocean. 1,400 kilometers away in Hawaii, the EMP blast knocked off streetlights, set off burglar alarms and damaged a microwave link. In the months following the Starfish Prime test, at least six low earth orbit satellites failed due to radiation damage, including the one that was launched prior to the test to measure the distribution of radiation produced by the blast.

In the Soviet Union too, similar research on EMP was being conducted. The same year Starfish Prime took place, Soviet scientists detonated a 300 kiloton bomb at an altitude of 290 km above Kazakhstan. To measure the effects of the EMP arising from the blast, they strung a 570 kilometer-long overhead telephone line and fitted them with fuses and gas-filled overvoltage protectors. The EMP from the test caused all the fuses to blow and all of the overvoltage protectors to fire along the entire length of the test-line. Furthermore, the EMP set on fire the electrical power plant in the city of Karaganda by inducing currents in a 1,000 km long shallow buried power cable. Despite the lower yield of the bomb, in comparison to that of Starfish Prime, the EMP damage caused by the Soviet bomb was much greater because the tests were done over a large populated land mass, and the earth’s greater magnetic filed at the location also assisted to concentrate the effects of the EMP.

The Huron King test was conducted on 24 June 1980 as part of ‘Operation Tinderbox’. The objective was to measure and quantify the damage an EMP blast can inflict on a military satellite, and whether the shielding techniques used were adequate to deflect such an attack. Because atmospheric nuclear testing was prohibited, the engineers devised a novel solution—the test itself would take place underground, with a military communications satellite suspended directly over the exploding device. The satellite will be housed inside a giant 50-ton vacuum chamber built in order to simulate the vacuum of space. This vacuum chamber was nicknamed Tinderbox. 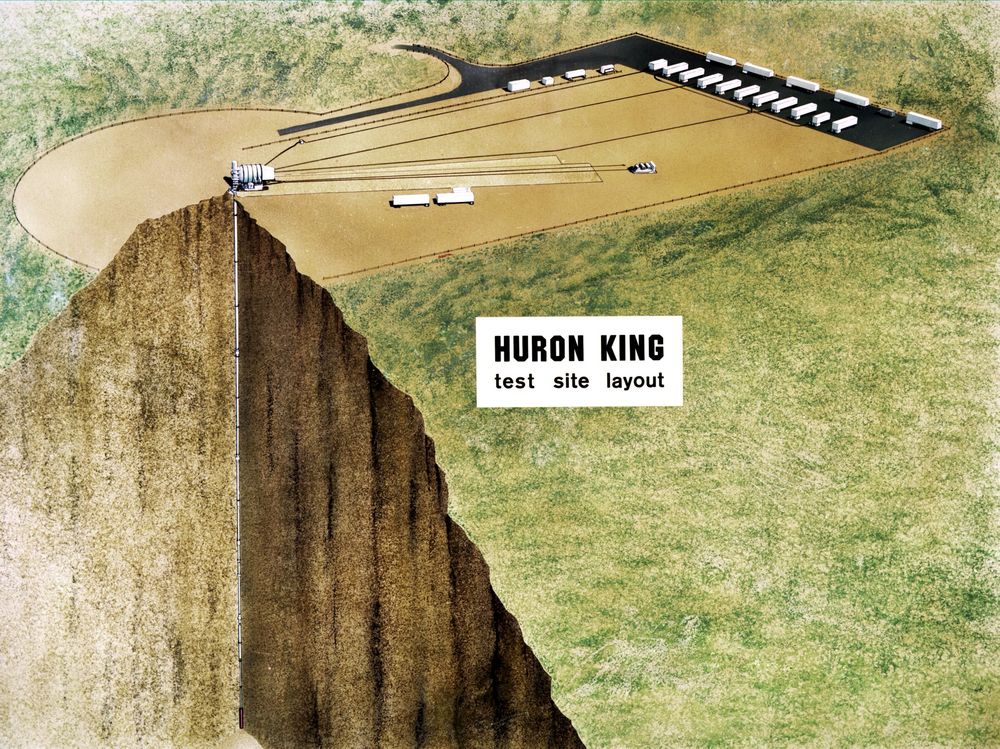 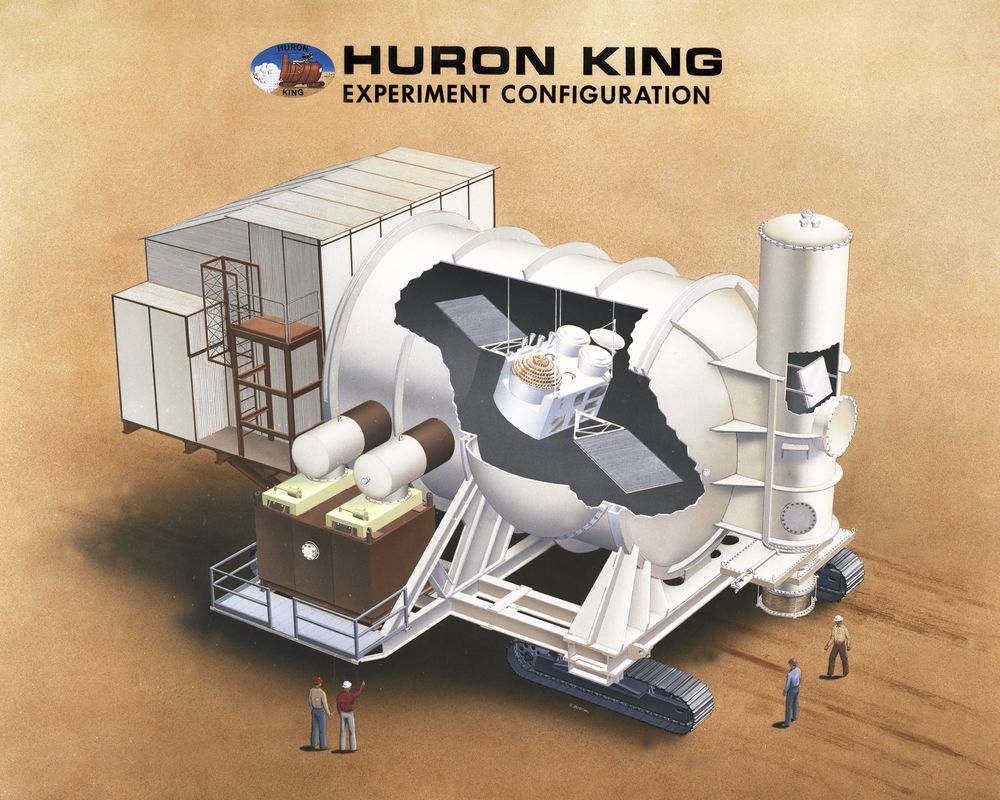 A 1,000-foot deep shaft was drilled and a 20-kiloton device was placed at the bottom of it. The Tinderbox, which was mounted on traction tread to make it movable, was parked at the top of the shaft and connected to the shaft by a vertical section. When the bomb detonated, radiation from the explosion shot up through the vertical shaft exposing the satellite to the electromagnetic pulse. A fraction of a second later, before the blast wave from the explosion could hit the Tinderbox and damage the target, mechanical closures sealed the shaft shut. The test chamber was immediately disconnected by remote control from the shaft and quickly winched to safety before the ground could subside to form a crater.

An inspection of the satellite after the test showed that the EMP shielding had worked as intended, and the satellite suffered no severe loss of functionality. The Huron King test cost USD 10.3 million in 1980 (equivalent to $35 million in 2020). The test chamber was never used again. You can still see it in satellite images (the site is off-limits to visitors) standing among the craters, 600 meters from its original location. It stands isolated in the middle of the Nevada desert, about 25 miles north of Mercury, a closed village and the gateway to the Nevada Test Site. 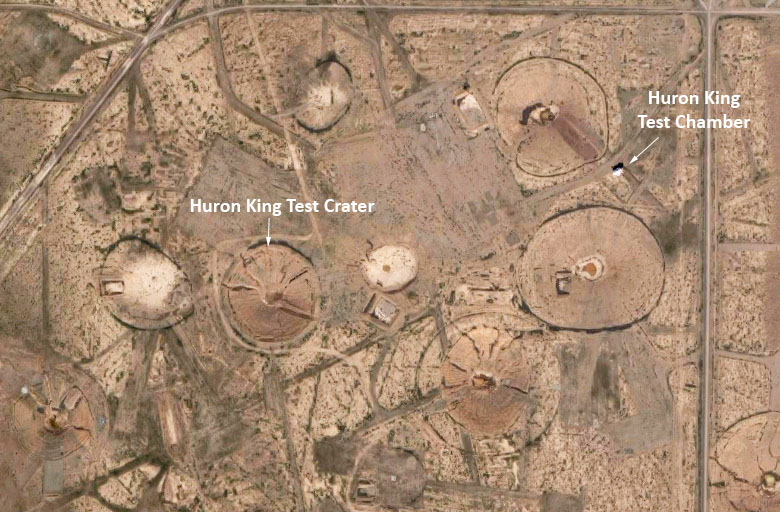 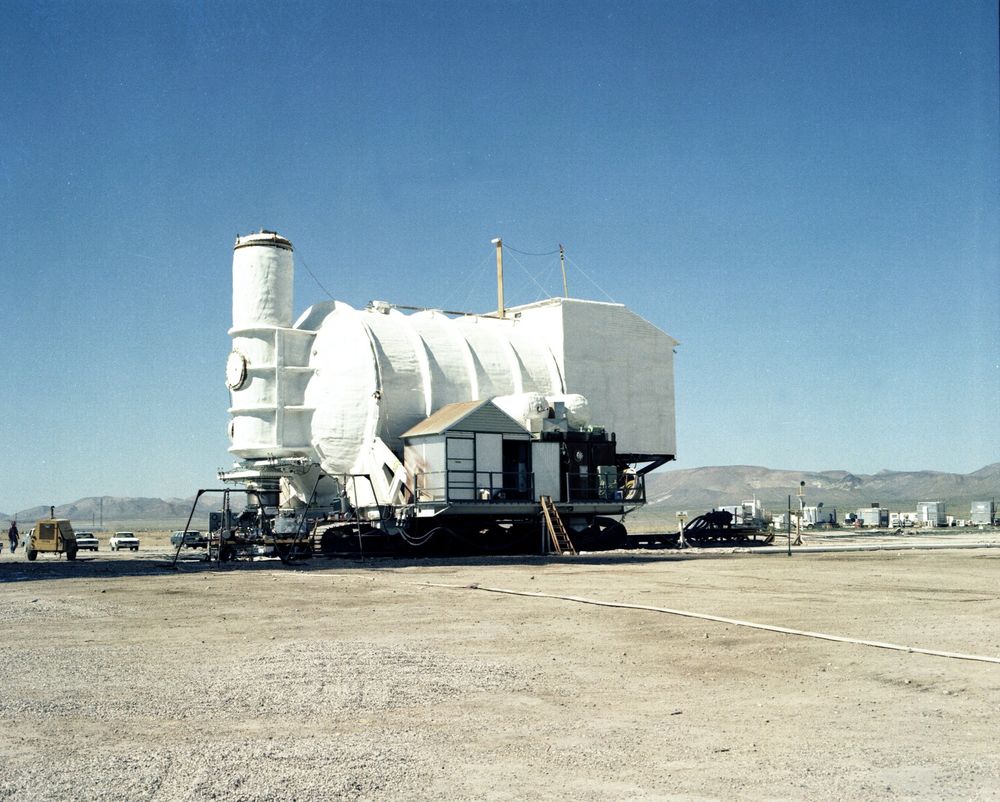 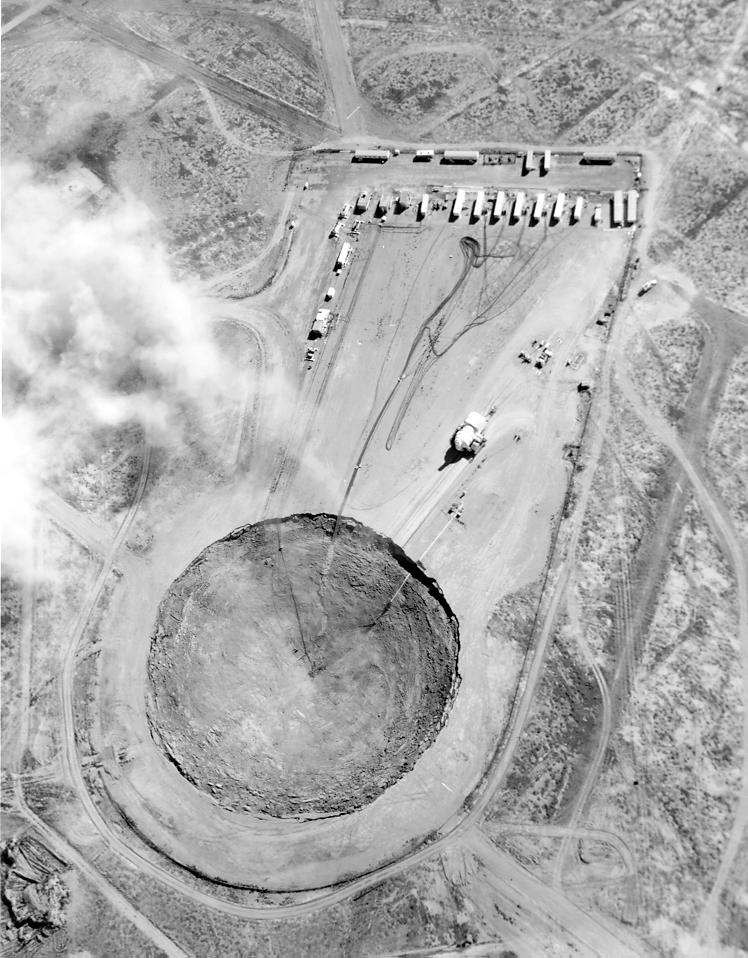 The Huron King Test right after the ground had subsided. The plumes of dust still in the air. Photo: https://fas.org/irp/imint/nts.htm