Throughout the 19th century, the Paris morgue attracted thousand of visitors every day. Eager tourists consumed by a morbid fascination with death jostled in front of a large glass viewing window and craned their necks to see the corpses recently fished out of the River Seine or murdered in a gruesome fashion. Going to the morgue was often compared to going to the theatre.

The official function of the morgue was identification of the bodies, but few, if any, went there with the intention of helping the police solve a crime. Most went their to gawk and gossip. “Victorian” Parisians had a tremendous appetite for sensationalism and the morbid, and newspapers provided the fodder, churning up speculative stories about the latest crime complete with lurid details which the public gobbled up with zeal. Once they were done reading about a murder in the paper, they went straight to the morgue to view the victim’s body in flesh. Often these outings were family affairs, for the morgue was a place of social gathering where people of all classes and genders mingled. Even the kids were not spared from this ghoulish ritual.

The morgue is a sight within reach of everybody, and one to which passers-by, rich and poor alike, treat themselves. The door stands open, and all are free to enter. There are admirers of the scene who go out of their way so as not to miss one of these performances of death. If the slabs have nothing on them, visitors leave the building disappointed, feeling as if they had been cheated, and murmuring between their teeth; but when they are fairly well occupied, people crowd in front of them and treat themselves to cheap emotions; they express horror, they joke, they applaud or whistle, as at the theatre, and withdraw satisfied, declaring the Morgue a success on that particular day.

The bodies were displayed behind a glass window on slanted marble slabs. They were stripped naked with only a loin cloth to protect their modesty. The actual clothes were hung above them to help with identification. Cold water dripped from a pipe above their heads to slow down decomposition. This was before the days of refrigeration. The body would last this way up to three days, after which they were removed, and depending on the demand, replaced by a wax cast or a photograph.

The morgue was originally located in the dark, humid basement of the Grand Châtelet prison, from which it was transferred in 1804 to its own building at Quai du Marche, on the corner of Pont St Michel, close to the river. This building had a dissection chamber, a washing room, a room for identified corpses, a storage chamber for bodies, and the all important viewing room that could display up to ten corpses at a time. During the redevelopment of Paris by Baron George Haussmann, the morgue was transferred again in 1864 to a new and more spacious building behind Notre Dame Cathedral. The morgue became more flamboyant and even more accessible to the public. A curtain was installed over the glass view window, that was drawn shut when bodies were changed, like one drew curtains over a theater stage. 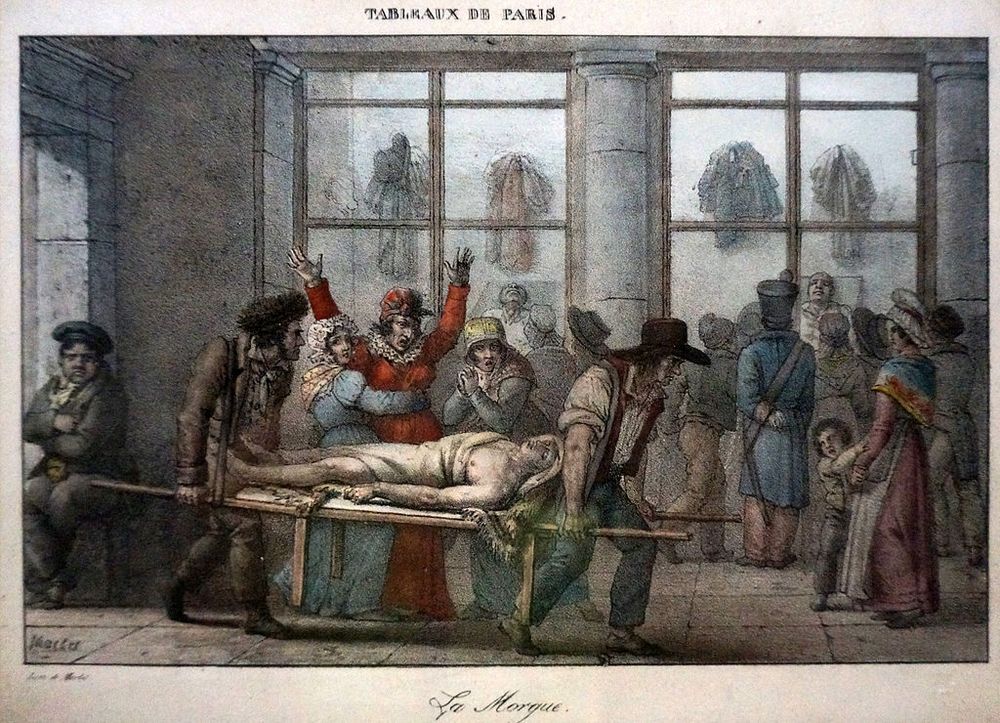 the kids, who go there as they would to a theatrical representation, call the exhibited corpses the artists, if the exhibition room happens to be empty, they say: The theater is temporarily closed today.

Sometimes crowds gathered at the morgue expecting a display after reading about a crime in the newspaper, even when there was nothing to see. One journalist of Le Petit Journal once reported:

This morning, the crowd still waited outside the Morgue. I have already said it and I will say it again, the cadavers will not be on view.

Urged by tourist guidebooks and lured by local gossip, a visit to the morgue, nicknamed Le Musée de la Mort (The Museum of Death), soon became an unmissable attraction for anyone visiting Paris. In The Innocent Abroad (1869), Mark Twain writes about a trip to the morgue. After describing the morgue and the gruesome displays, he turned his attention to his fellow visitors:

Men and women came, and some looked eagerly in, and pressed their faces against the bars; others glanced carelessly at the body, and turned away with a disappointed look—people. I thought, who lived upon strong excitements, and who attend the exhibitions of the Morgue regularly, just as other people go to see theatrical spectacles every night. When one of these looked in and passed on, I could not help thinking—Now this don’t afford you any satisfaction—a party with his head shot off is what you need. 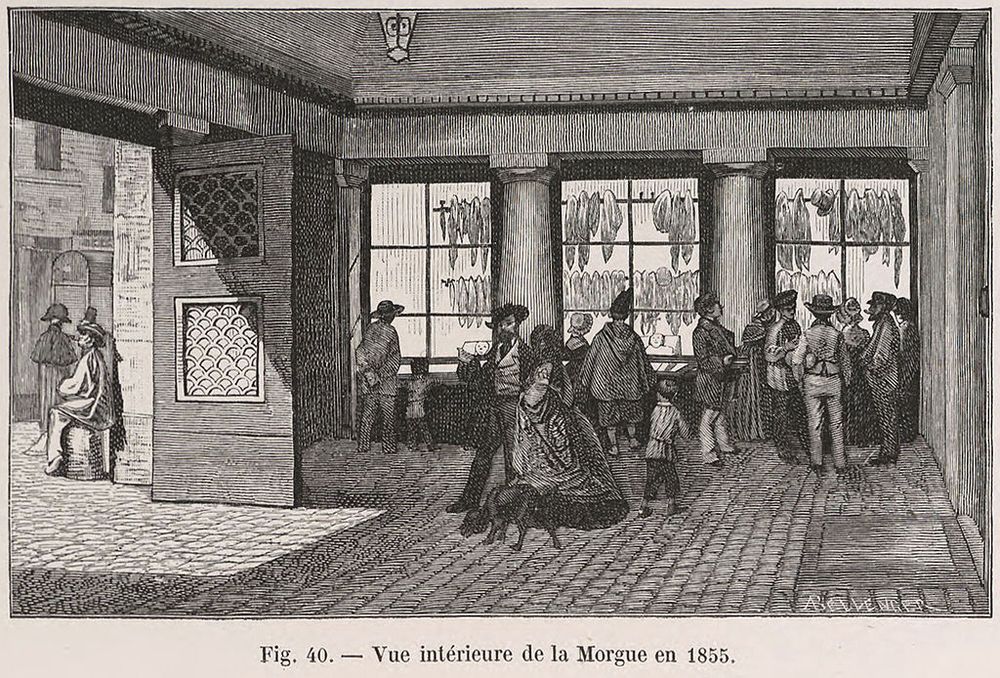 Although the morgue was open seven days a week and throughout daylight hours, gaining entry was never easy, especially when there was a corpse on display. In 1876, the severed body of a woman was pulled out of the Seine, apparently murdered by her lover. The discovery caused a media sensation, and in the days that followed, between 300,000 to 400,000 people filed into the morgue to see her mortal remains. At another time, the accidental death of a 4-year-old girl pulled in a crowd of more than 150,000. To add drama to the tragedy, the morgue posed the corpse of the little child on a chair instead of laying her out on the cold hard marble. Sometimes the corpses themselves, or the circumstances surrounding their death, were so intriguing, that no embellishments were required to capture the imagination of the people. This was the case with Inconnue de la Seine—the unknown woman of the Seine.

In the 1880s, the body of a young woman was fished out of the Seine River. Because there was no evidence of violence upon her, it was assumed that she had taken her own life. The woman had a beautiful ‘Mona Lisa’ smile upon her face, and the pathologist on duty became so entranced by her beauty that he had a plaster cast of her face made. Before long, the white plaster cast of the unknown woman started appearing in shops throughout Paris, and in the following years, copies of the mask became a fixture in all fashionable Bohemian homes across Europe. The mask’s enigmatic smile bewitched artists, poets and novelists, and over the decades dozens of poems were written and stories invented to give the young woman an identity. This death mask eventually became the face of a CPR training mannequin, that’s now used to train medical and paramedical students the world over. 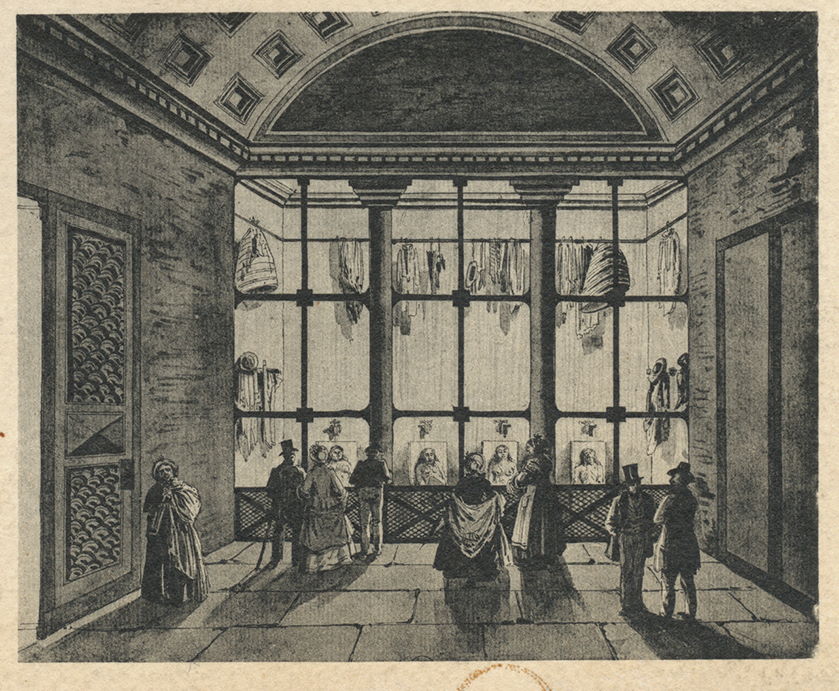 The interior of Morgue de Paris in 1845. Photo: pariscemeteries.blogspot.com

To many of us, the voyeurism and morbid obsession with death may seem like cheap thrill, comparable to Victorian Britain’s fascination with public execution, although in this case it is the victim rather than the perpetrators of the crime who are on display. But contemporary writers saw the morgue as a civic institution with a purpose, and the spectators as concerned individuals driven by empathy and a strong moral sense.

By the turn of the 20th century, some people began to question the morality of these vulgar exhibitions. Following a public campaign against such immoral displays and the gradual change of public attitudes to the viewing of dead bodies, concerns over hygiene and the spread of disease, the Paris morgue closed its doors to the viewing public in 1907. 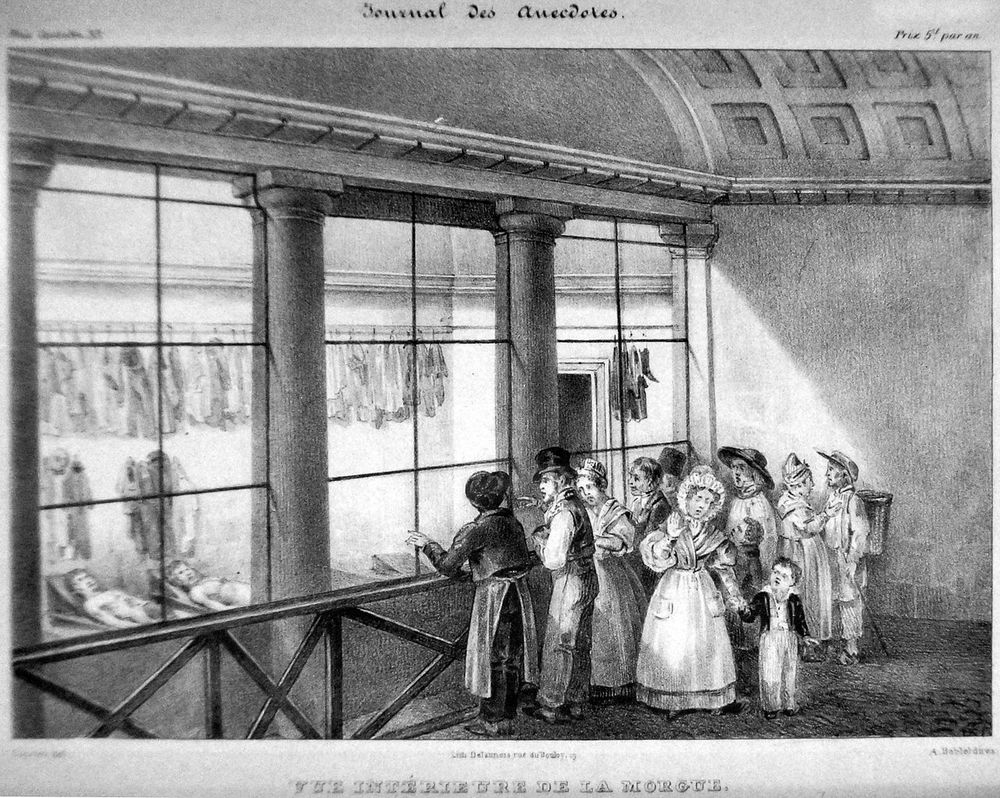 A glimpse of the Paris Morgue’s interior. Photo: G.Garitan/Wikimedia Commons