Pierre André Latreille: The Entomologist Who Escaped Death Because of a Beetle

Writers usually have their favorite writing spots, a small, secluded space, sparsely furnished, where creativity flows unimpeded. The chosen environment is typically distraction-free, like the library, a hotel room, inside a car, or even a prison cell. Many significant literary works have been produced from within prisons. Indeed, locking oneself up with only a typewriter, or pen and paper, is a reasonable strategy. The Hunchback of Notre Dame became possible only because Victor Hugo placed himself under house arrest and locked his clothes away to avoid the temptation to go outside. Many famous writers had reclusive writing sheds away from their homes and from the drudgeries of domestic life. Let’s look at some of them.

Roald Dahl had a small writing hut in Great Missenden, in Buckinghamshire, where he wrote many of his famous stories. Inside the little hut, Dahl surrounded himself with pictures, inspirational quotes and photos of family and friends. He sat in a wing-back chair, which used to be his mother’s, with a hole cut in the back to relieve the pain from an abscess he suffered. When it got cold, he covered his legs with a sleeping bag. The working desk was filled with mementos to inspire him—a ball of crushed silver foil KitKat chocolate wrappers, a brass ornament of a Spitfire plane and his hip bone kept after his hip replacement. The only light in the hut came from an angle poise lamp.

“When I am up here I see only the paper I am writing on, and my mind is far away with Willy Wonka or James or Mr Fox or Danny or whatever else I am trying to cook up. The room itself is of no consequence. It is out of focus, a place for dreaming and floating and whistling in the wind, as soft and silent and murky as a womb…”

—Roald Dahl, ‘Roald Dahl: From the Inside Out – the Author Speaks’ 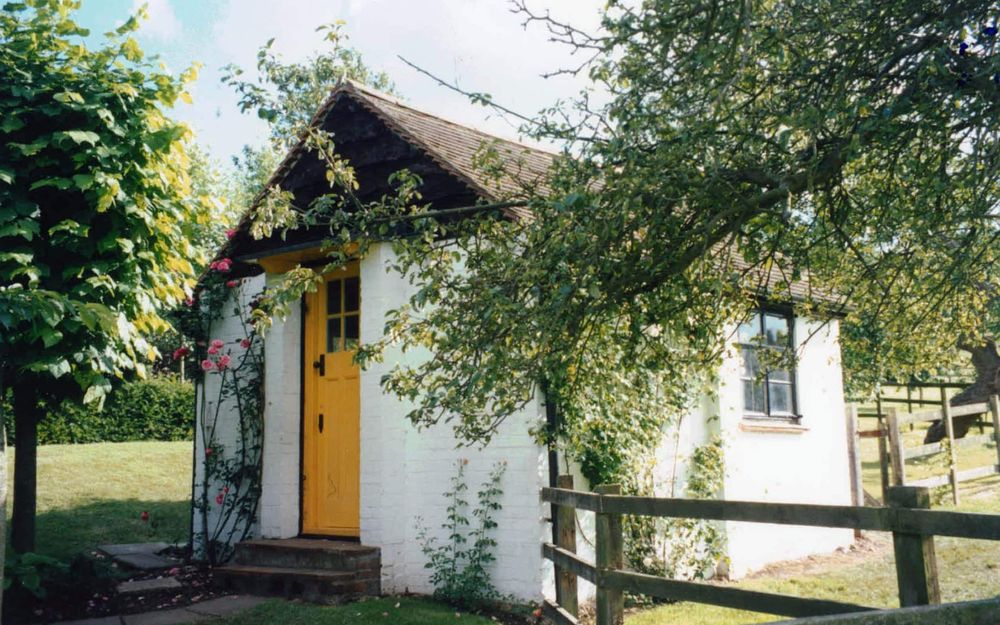 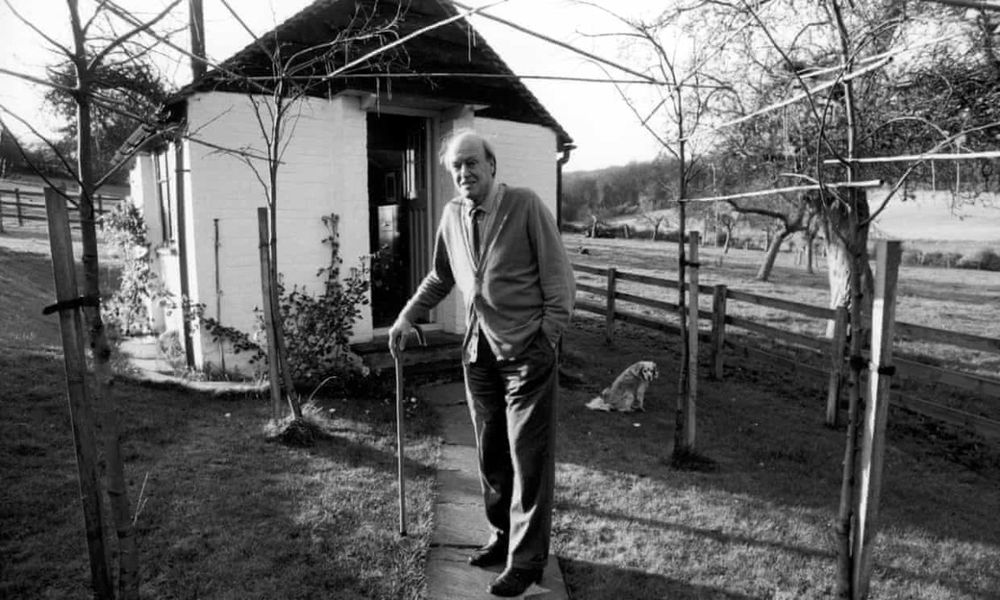 Dylan Thomas was the inspiration behind Roald Dahl’s writing shed. The Welsh poet had a writing hut in Carmarthenshire, near his home, on the cliffs overlooking the Tâf estuary, where he wrote many of his major pieces. Roald Dahl visited Dylan Thomas in the 1950s and he became so impressed by the reclusive retreat, that he had one made for himself with the exact dimensions. 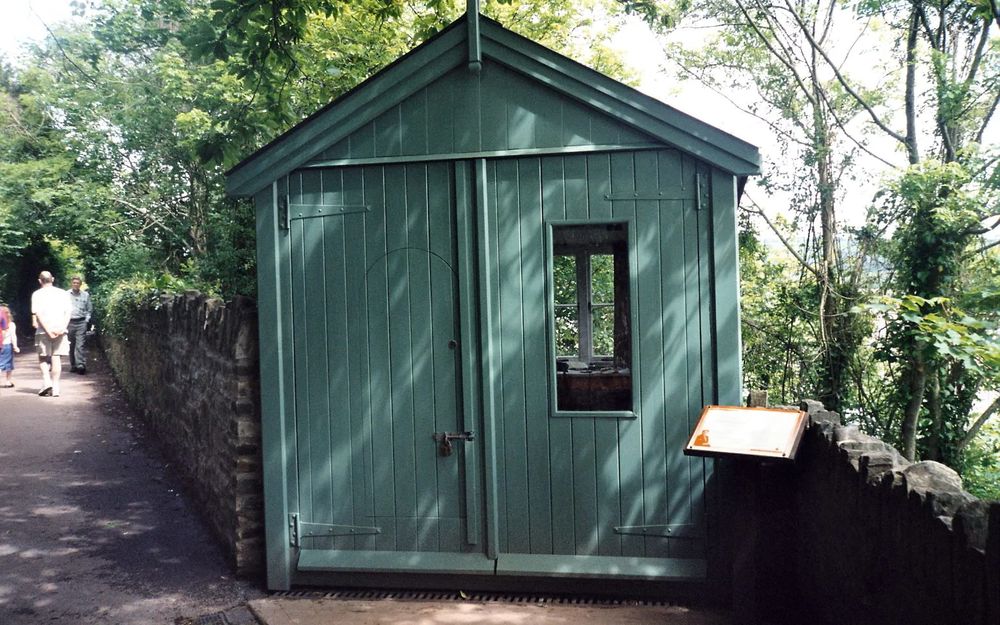 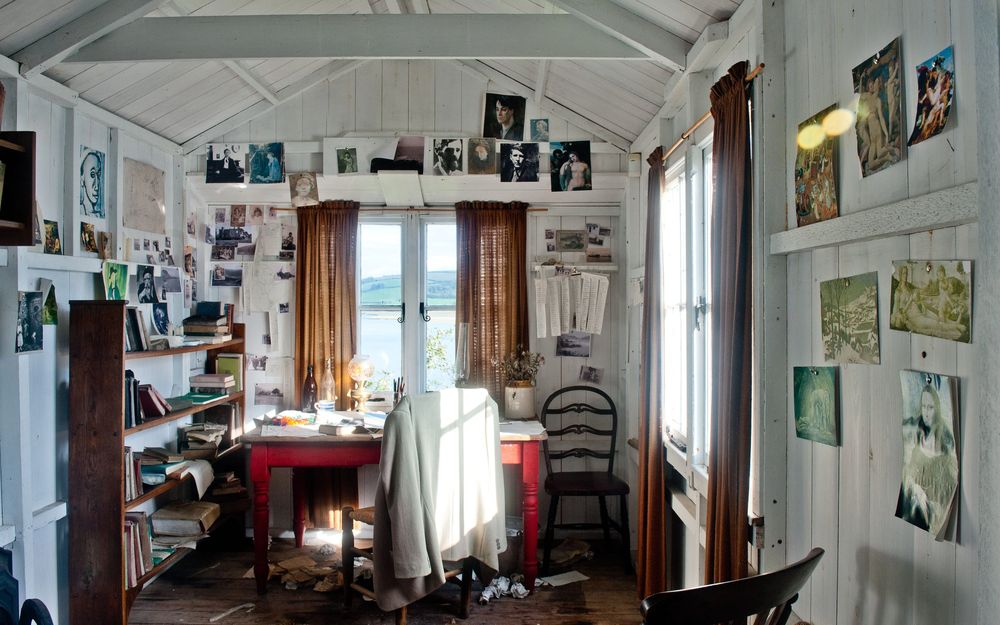 Mark Twain had an octagonal study located on a spectacular promontory overlooking the Chemung River in Elmira, New York. It was built by his sister-in-law, Susan Crane, who wanted Mark Twain out of her house because he chain smoked. The wooden study was about 12 feet across and designed to resemble a Mississippi steamboat pilot house. Twain called it “the loveliest study you ever saw”. He wrote:

It is octagonal in shape with a peaked roof, each space filled with a spacious window and it sits perched in complete isolation on the very top of an elevation that commands leagues of valleys and city and retreating ranges of distant blue hill. It is a cozy nest and just room in it for a sofa, table, and three or four chairs, and when the storms sweep down the remote valley and the lightning flashes behind the hills beyond and the rain beats upon the roof over my head—imagine the luxury of it,”

On hot days I spread the study wide open, anchor my papers down with brickbats and write in the midst of the hurricanes, clothed in the same thin linen we make shirts of. The study is nearly on the peak of the hill; it is right in front of the little perpendicular wall of rock left where they used to quarry stones. On the peak of the hill is an old arbor roofed with bark and covered with the vine you call the “American Creeper”—its green is almost bloodied with red. The Study is 30 yards below the old arbor and 100 yards above the dwelling-house—it is remote from all noises.

After Mark Twain’s death, the tiny cabin was relocated to Elmira College where it currently stands. 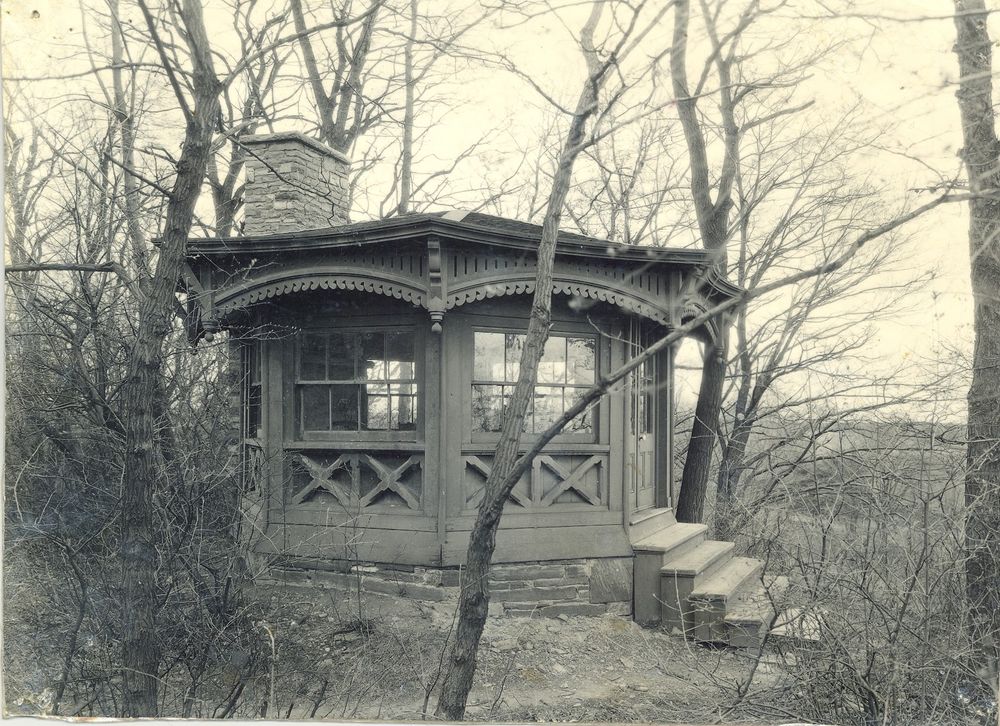 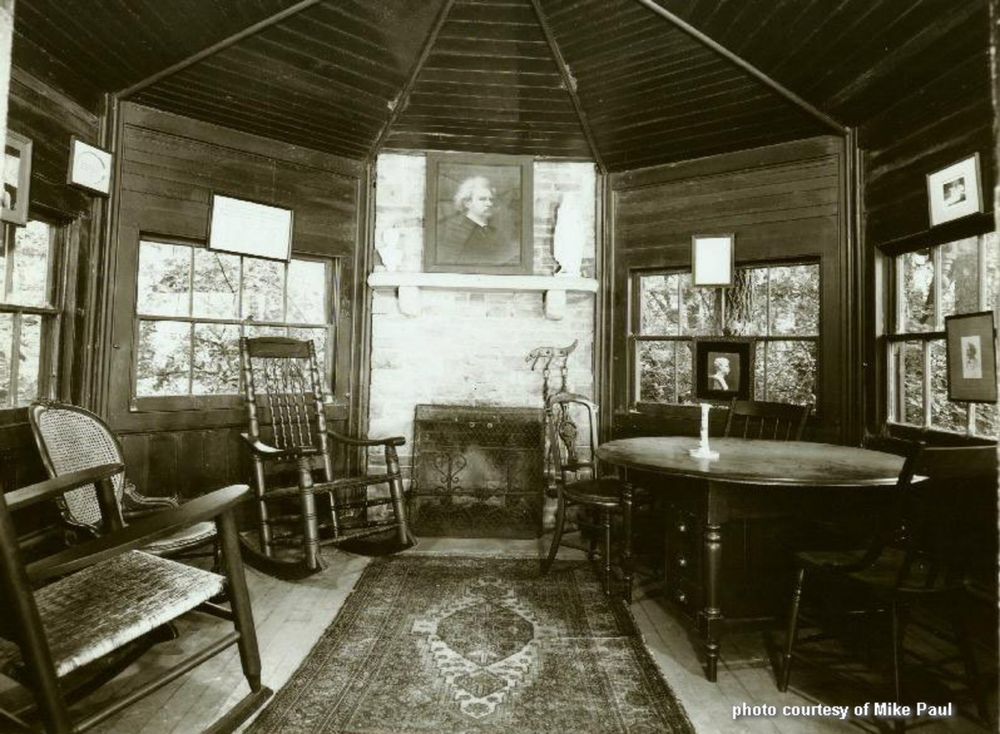 George Bernard Shaw had a unique rotating hut that could be easily turned to let it the sun. In a 1932 report, Modern Mechanix described the hut’s curious design:

Mr. Shaw has a plan to keep the sun shining on him constantly while he works. He has constructed a small hut on his grounds that is built on a turntable. When the morning sun shifts, he merely places his shoulder against the side of the hut and gives it a push so that the warming beams fall through his window at the correct angle.  Mr. Shaw’s plan to keep the sun shining on him is a simple health measure, and not a wanton eccentricity.  The author has spent most of his life out of doors, but when he moved to London he didn’t get as much sun as he thought he needed. Hence the hut.

The hut is located in the small village of Ayot St Lawrence, in Hertfordshire, on the grounds of Shaw’s primary residence. It remains intact exactly as the great writer left it when he died in 1950. 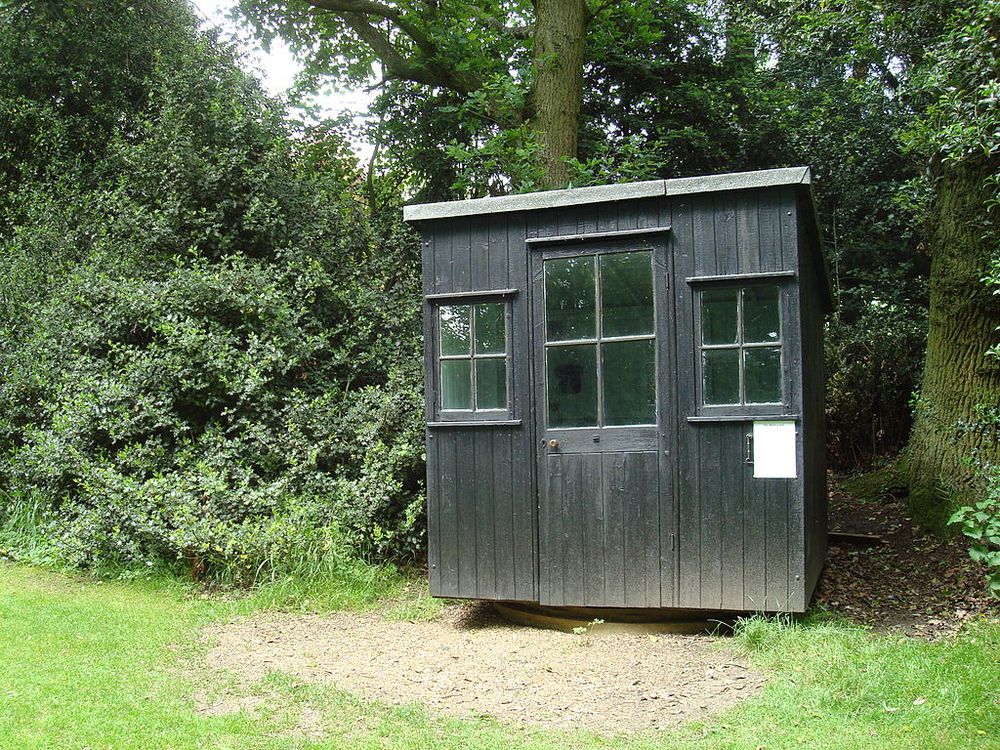 The American naturalist and philosopher Henry David Thoreau spent exactly two years, two months, and two days in a remote cabin he built near Walden Pond, a lake in Concord, Massachusetts, where his friend and mentor Ralph Waldo Emerson owned a woodland. Thoreau used this time to write his first book, A Week on the Concord and Merrimack Rivers. Later, Thoreau wrote another book, his best known, titled Walden, or Life in the Woods, where he recounted his experience living in isolation.

I went to the woods because I wished to live deliberately, to front only the essential facts of life, and see if I could not learn what it had to teach, and not, when I came to die, discover that I had not lived. I did not wish to live what was not life, living is so dear; nor did I wish to practise resignation, unless it was quite necessary. I wanted to live deep and suck out all the marrow of life, to live so sturdily and Spartan-like as to put to rout all that was not life, to cut a broad swath and shave close, to drive life into a corner, and reduce it to its lowest terms, and, if it proved to be mean, why then to get the whole and genuine meanness of it, and publish its meanness to the world; or if it were sublime, to know it by experience, and be able to give a true account of it in my next excursion.

—Henry David Thoreau, “Walden, or Life in the Woods”

There is a replica of Thoreau’s cabin and a statue of him near Walden Pond today. 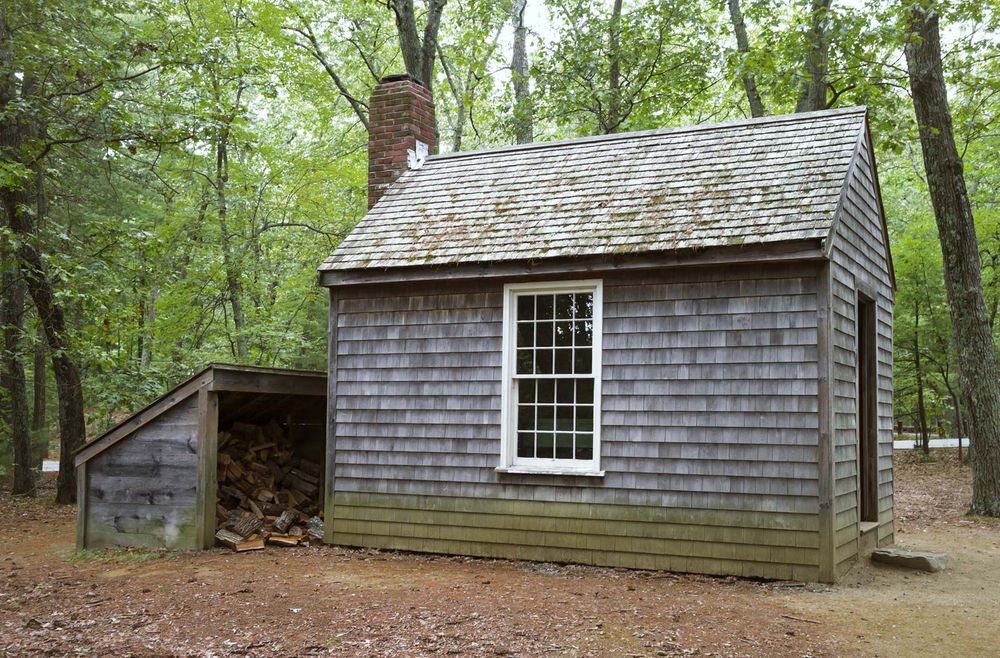 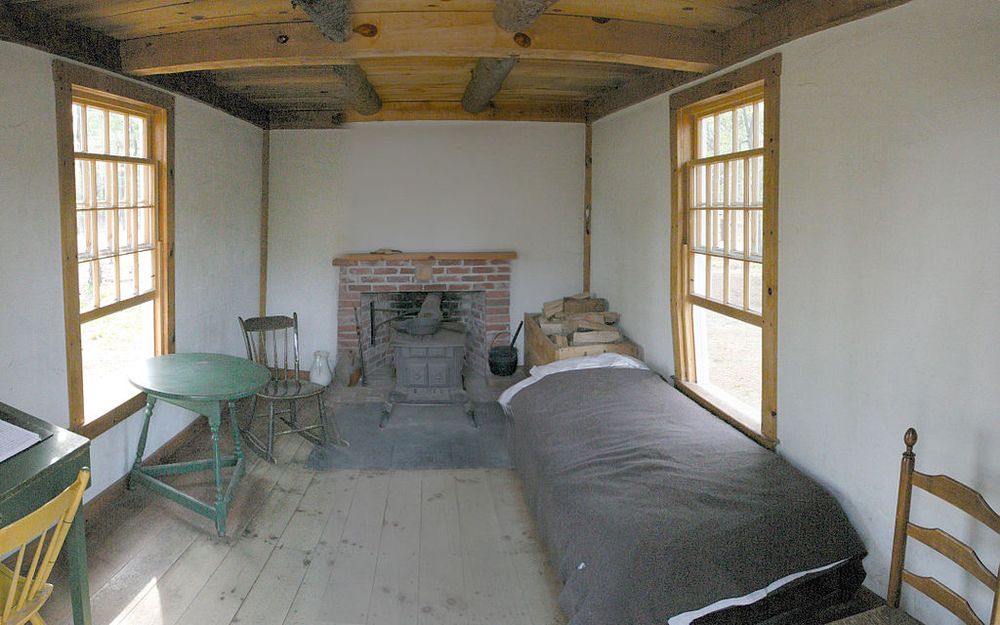 After Virginia Woolf and her husband bought a 16th century cottage in the village of Rodmell, in Sussex, England, Woolf had a small wooden toolshed in the garden converted into a writing room. It was not the most comfortable of cabins. She was always distracted by her husband sorting apples over her head in the loft, by the church bells at the bottom of the garden, and by the noise of the children in the school next door. In winter, the cabin would become so cold she couldn’t hold her pen and had to retreat indoors. Five years later, Woolf moved her writing lodge to the far end of the garden, under the chestnut tree next to the flint churchyard wall. Woolf wrote parts of all her major novels in this lodge from Mrs Dalloway to Between the Acts, and many essays and letters. 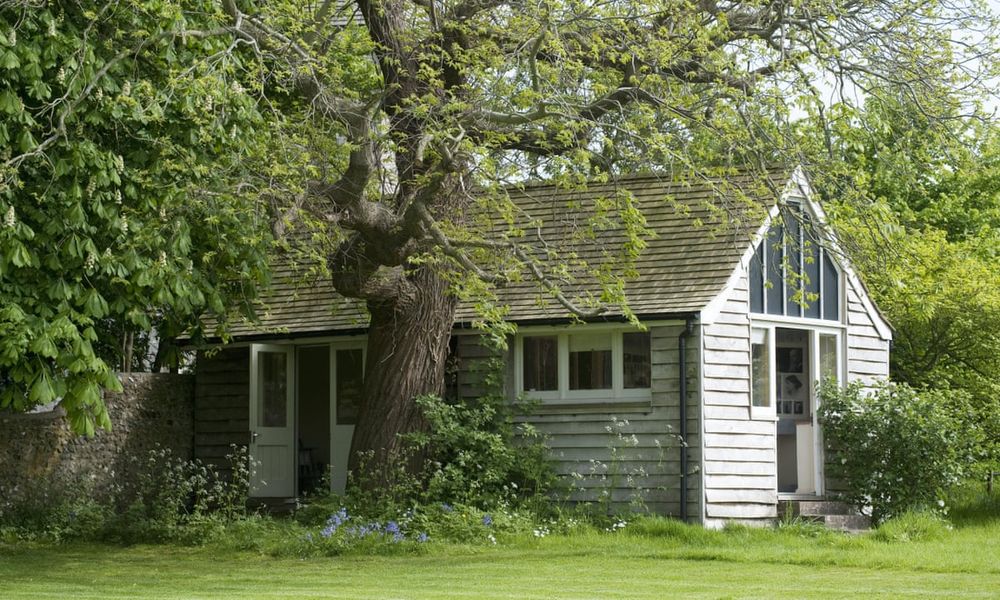 Henry Williamson, best known for his book Tarka the Otter, built a wooden hut near Georgeham out of the prize money he won with the Hawthornden Prize in 1928 for the aforementioned book. Williamson wrote many of his later books there, sitting alone in the hut for 15 hours a day.

Following his death the hut was maintained by members of his family until it was sold in 2014. The same year, the hut was granted Grade II listed status by English Heritage. 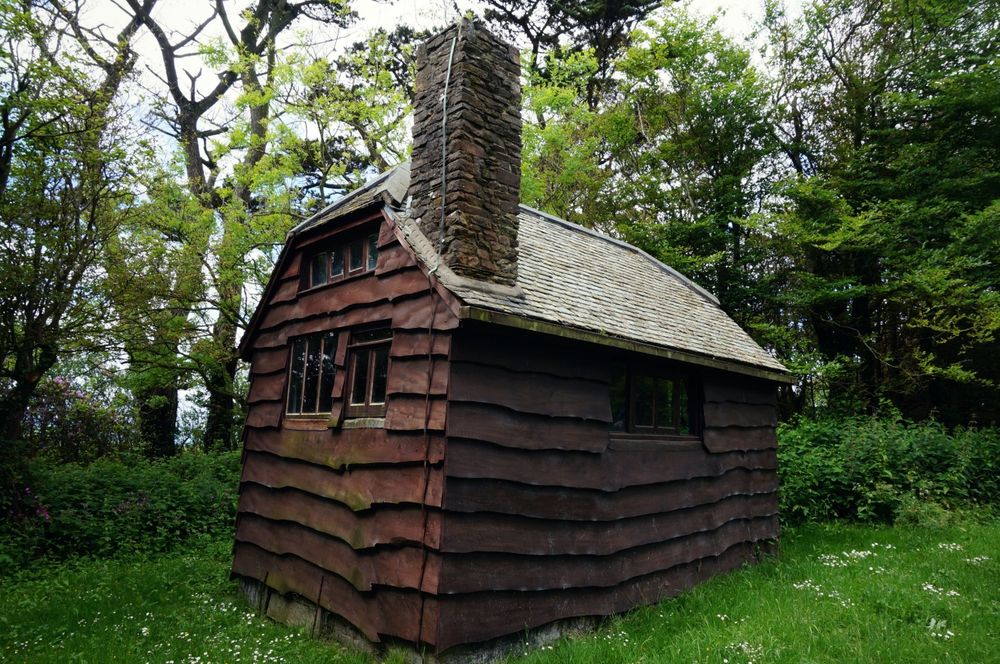